About Dalyan
The town of Dalyan is a riverside coastal town located between the districts of Marmaris and Fethiye. It is one of the most
common stops on the Marmaris to Fethiye blue cruise. In Turkish, the term Dalyan means “fishing weir”. It was named after the Bass, Mullet and Sea Bream which swim from the sea to the nearby Koycegiz Lake – when the fish return they get caught in the ‘Daylans’.

In 1987, Dalyan found itself making international headlines as developers seeking to build a luxury hotel at Iztuzu Beach went head-to-head with well-known environmentalists. The beach is a breeding ground for endangered loggerhead sea turtles, one of the oldest surviving species of turtle, laying its eggs between the months of May and September. The environmentalists demanded a halt to the development in order to allow for an environmental study to be carried out. Prince Phillip (who was at the time president of the WWF) contacted the Turkish Prime Minister to make such a request, which was granted. As a result of the study, the beach as well as the surrounding red pines, sweet gum forests and marshland were granted Special Environmental Protection Area status and that developers were prohibited from continuing with their project. It was a great victory for the environment, led by the now well-known and highly respected environmentalist “Kaptan” June Hainoff (who was awarded an MBE by Queen Elizabeth in 2011for her environmental protection efforts).

The Dalyan River flows past the town, and the boat is commonly used for transportation of the local sights. Lands are highly fertile around this area, with pomegranate, fruits, vegetables and cotton being grown by local farmers to sell at the markets.

Things to do in Dalyan
Explore this charming town via the main street and surrounding bars and restaurants.  There are also a number of great day-trips around Daylan.

Just down the river from Daylan, set amongst an imposing cliff face you can see a series of columns and temple façade tombs carved into the rocky cliffs by the ancient Lycans – the tombs date back to around 400BC and are known as the Kings' Tombs of ancient Kaunos. The kings of the ancient city were buried here amongst various treasures. Over time, treasure hunters have looted the tombs, however, the carvings are a magnificent sight. At night the tombs are lit up, providing a special view from the river. For a closer look at the tombs, you can take a boat across the river and view the tombs from the base of the cliff.

Iztuzu Beach is another top attraction – this 4.5km environmentally protected stretch of beach is one of the Mediterranean’s main breeding grounds for endangered loggerhead turtles (as mentioned above). It has been estimated that turtles make about 300 nests per year on the beach. As a result, their regulations have been imposed to protect the nesting grounds. From May to October, the public cannot enter the beach at night (8 pm to 8 am), sunbeds are forbidden in marked nesting zones and lying down on towels or digging holes is forbidden.

If you’re interested learning more about the turtles and this environmental success story, go to the southern end of the island where you will find a reconstructed beach hut which has been converted into a small museum dedicated to the work of June Hainoff (Kaptan June).

Bars in Dalyan
There are a number of great little bars in Dalyan, all offering great cocktails. We recommend a visit to Sunray Bar for excellent cocktails, live music and a view of the ancient tombs. If you’re in the mood for some karaoke with a busy atmosphere then head to Sofra Bar.

Where to eat in Dalyan
Dalyan is a great spot to grab a delicious meal. Most restaurants can be found on the banks of the Dalyan River but there are also a couple of hidden gems in the streets behind. A favourite is the Dalyan Iz Café, which is a café, art gallery and shop. There is a lovely shaded garden where you can enjoy homemade delights including cakes and treats, as well as juices and soft drink. There are also a variety of salads, sandwiches and snack items.

A visit to Turkey is not complete without trying authentic Turkish gozleme. Serving up both the sweet and savoury Turkish style pancake, it’s no wonder guests return day after day.

The Limon Café Restaurant is a personal favourite not only because of the food but also live entertainment. A fusion between Greece and Turkey, this restaurant serves up a variety of Turkish and Greek meals and entertainment from both regions as well.

During your visit to Turkey, it is recommended to visit other destinations along the coastline including Ekincik, Icmeler and Didim. 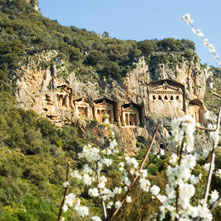 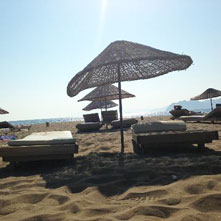 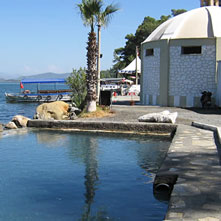