About Olympos
Olympos was an ancient Lycian city, located 40-50km south of Antalya, named after the nearby Mount Olympos, situated about 15km north of the city. Now, a the secluded village, it is a popular tourist destination for young people and budget travellers, with tree-house hostels, drum-circles and a wide range of activities.

Conservation laws actually ban the use of concrete in Olympos, which means no fancy hotels, large scale developments or mass tourism.

There is a 1.5km track which runs along the valley and down to the ruins of the former ancient city. Many campsites can be found along the track, giving the place a budget traveller atmosphere. All around Olympos you can see thick greenery, grapevines, wild figs and bay trees.

Just inland from the beach, there is a rocky gorge, where a reed-filled river ruins next to the ruins and into the sea.

History of Olympos
The history of Olympos is somewhat of a mystery. It is known that it was an important city for the Lycians, obtaining entry into the “Lycian League” from at least the 2nd century B.C. The city had three votes in the Lycian League, indicating that the city was wealthy and prominent. The people worshipped the fire god known as Hephaestos.

Olympos’ coastal location made it vulnerable to pirate attacks and around 100BC it was overrun by Cilician pirates and thrown out of the League as a result.

The city was eventually absorbed into the Roman empire, but in the 15th century, it was completely abandoned.

Things to do in Olympos
Set amongst a dense forest, you will find the ancient ruins of Olympos. Unlike most ruins, they are have not been maintained - grass and vines have been allowed to grow wild amongst the ruins which give the place a magical feel. It is advisable to wear shoes as exploring the ruins can mean some scrabbling around the rocks and through bushland. There is a small entry fee.

The beach at Olympos is one of the best in Turkey, you can cool off in the water or hire a kayak from one of the nearby guesthouses.

Rock-climbing is another popular activity in Olympos, where you can climb high limestone cliffs amongst beautiful scenery. You can also hire mountain bikes and go riding around Mount Olympos. Gear and information can be obtained from the guesthouses.

Day trips around Olympos
Just a 30-minute drive from Olympos, you can visit the eternal flames of Chimera which have been burning for more than 2000 years, and constantly continue to burn day after day. They are named after a mythical fire breathing creature which legend says made the mountains it is home.

The flames are located in a mountainous area in the nearby town of Cirali and have been kept alight by a rare form of methane which continually seeps through the vents of the rocks below. This gas is known in Turkish as ‘yanartas’. It has been said that sailors once used the flames were used as a reference point or ‘natural lighthouse’. The flames are larger during the winter months due to changes in atmospheric pressure.

You can brew a hot drink in the flames and marvel at this natural wonder. If the atmospheric pressure is right, the flames are quite a spectacle at night time and people often camp in this area for this very reason.

Where to stay in Olympos
Staying in one of the chilled out treehouse hostels a great experience. The accommodation is usually basic, however, there is still hot water and usually free wifi.

You can really escape the stresses of the world amongst the laid back tree-house atmosphere, great music and fantastic food. Bayram's, Sabans and Kadir’s are all great choices for hostels.

Around Olympos
Some other great destinations to visit around Olympos include Kekova, Finike and Cirali. 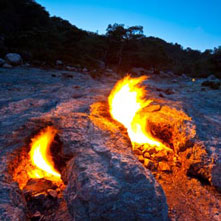 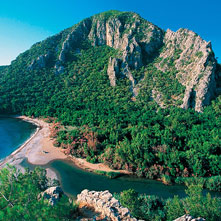 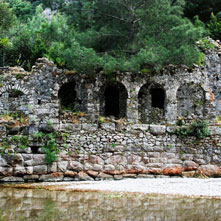