About Demre
Demre was the Roman city of Myra and by the 4th century, it was considered to be important enough to have its own Bishop, St Nicholas. St Nicholas evolved into what we now know as Santa Claus. In Demre, the rich fertile soil supports the zealous greenhouse production of vegetables and flowers. Watching over the town is a grand castle which looks spectacular when it's lit up with the glow of a late afternoon sun. A 20 minute walk from the main square will take you to the Ruins of Myra where you can find striking Lycian Tombs and a well preserved Roman theatre. And just a short drive from the centre will bring you to the Andriake harbour where many visitors join a Kekova day cruise or the more famous Demre to Fethiye blue cruise. Before the tourist boom began in the early 1980s Demre was, and is still partly, dependent on agriculture with pomegranate, citrus fruits and vegetables grown year-round in greenhouses.  Local handicrafts, including rug making and the annual camel wrestling festival, also increase income for the town.

How to get to Demre
Demre is located on the D400 highway which links Antalya in the east and Fethiye in the west along the Lycian coast. In between both of these larger cities is a local dolmus service that runs almost every hour along the coastline. Travellers can reach Demre by bus from Kalkan, Olympos, Kaş, and Finike as well. The only other way to get into Demre is via boat into Andriake harbour. The harbour is around five minutes from the city centre.

Where to eat in Demre
As Demre remains quite a small village and is predominately visited by tourists to board a charter from the harbour including the Demre to Fethiye cruise or visit St Nicholas Church, there are actually not many restaurants to choose from. What you can expect though is entirely authentic Turkish cuisine. Some of the favourite eateries in Demre include Ipek Restaurant, Myra Café and Restaurant and Kekova Restaurant. In these restaurants, they serve up everything from dolma and pide to kofte and kebabs.

Things to do in Demre
Demre is the town where the legendary tale of Santa Claus originated. Aside from the magnificent stories of Christmas, the town has many sights and attractions to offer tourists from around the world.  It is here that Santa Claus who is known as Noel Baba in Turkish first brought joy and happiness. It is actually the story of St Nicholas, a 4th-century bishop that gradually transformed into the joyous tale of Santa Claus. The Santa Claus Museum located in Demre is the most visited place in the region. It was built in the 11th century and used to function as a church before. The museum exhibits many fascinating ancient relics and stories of St Nicholas including the story of gold coins being dropped into the shoes of the poor.

Aside from the museum, there are many ancient ruins and landscapes of great natural beauty in Demre. The ruins of “Roman Myra” lie only 2 kilometres away from the town. The ruins include a theatre with a huge sitting capacity which is very well preserved till this day. It was often used to house gladiator and animal fight shows. Built-in the 2nd century, the theatre is a powerful reminder of the ancient culture of this region. But the most impressive sight among the ruins is the Lycian tombs that are carved out of rock in the cliff wall. The tombs create an outstanding view if looked at from a distance and catching sunset over the tombs is quite magical.

Cayagzı is located just 5 kilometres west of Demre and is home to some magnificent ancient remains. It was called once called Andriake in the Roman times, what the harbour in Demre is now named after. Among the ruins of distinct architectures, there are plakoma, a few ancient baths, some charming churches and a small harbour. You can also find a small and attractive pebble beach surrounded by a few fine restaurants and cafes. A 1500-year-old Roman synagogue was discovered in the area by some students. It is located on the top of a hill overlooking the harbour. You will also find a Hadrian granary with 7 rooms in the area which currently serves as a museum of Lycian artefacts. It displays a brilliant 16-foot longboat from the Roman times.

As mentioned earlier the most attractive activity in the area is the blue cruises either arriving into Demre harbour or departing from the harbour. For those on their way into Demre it is suggested to spend half the day sightseeing in the town but then travel to other towns for accommodation including Kas, Antalya and Fethiye. 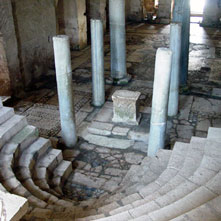 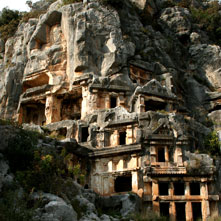 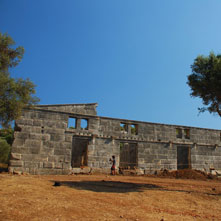